Today's the day. Rachel starts school. She has been so patient last week -- I think she thoroughly enjoyed spending the time with me, but she still missed getting on the bus and traveling to school. She wanted to see her teachers. She wanted to learn. And, most of all, she wanted the strict routine that the program provides, with all of it's predictability and curveballs. So, when she woke this morning and I told her she was going to school, she was a VERY happy little girl.

Breakfast went like normal, but, as was the case when Rachel and Simon turned 3 and started to take the bus to school, the bus came earlier than I was prepared for. The driver and aide informed me that the time had (yet again) been changed -- the letter I received from the transportation office said the pick-up time was 8:06 -- the time on their sheet was 7:55 (it was 8:00 last week when I spoke to them when they dropped Simon off early last week, and of course, no one thought to inform me). So, I rushed to bring Rachel to the bathroom and put on her shoes, neither job had been done yet. When we stepped outside and she saw the bus waiting for her, she was so happy, she couldn't get on the bus fast enough. 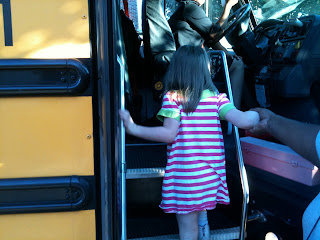 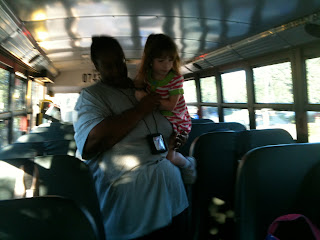 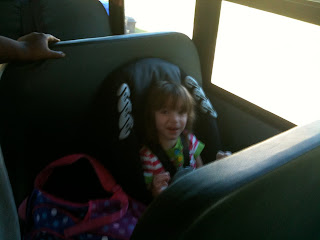 I went back inside to deal with getting the boys ready for school and all was going as normal. As soon as Simon's bus left, Daniel and I would get in the car and I would drive him down the hill to make it as likely as possible that he would arrive to school on time. Then, at 8:30, the doorbell rings. The first thing I'm thinking is that Simon's bus is there early as well, and the driver made some changes to the route to help me out. But it's not the driver -- it's our neighbor who has a son in kindergarten. She and I spoke briefly about the possibility of her driving Daniel to school in the morning and I would bring her son home in the afternoon. She was asking if I was still interested. YES!!!!! So, we quickly finished getting Daniel ready and he was off!!!!!! Then Simon's bus arrived on time and he was off for his first full day of the year.

Now we have a very livable solution to one of my biggest concerns early in this school year. Now I can focus on everything else that's waiting for my attention.

Rachel's first day went very well. The notes from her teacher mentioned all the positives and that they are trying to determine how much she's retained over the summer. I think they'll be very pleasantly surprised at her growth and not surprised by any of her regressions.

I called the Autism Office to ask about scheduling an IEP Meeting for Rachel -- according to her ESY teacher, she was getting very close to achieving many of her annual goals. I also have a few goals I'd like to add to the document to address issues that really weren't pressing last December that are becoming more important to us now that other things are so improved. I heard back from the school later this afternoon and they've asked if we can hold off for a little while until they determine whether and (if so) how she's regressed since the end of ESY (5 weeks ago). I do know there's been some regression (as expected), so I suspect we'll probably have our annual meeting close to when it's due. But at least now I've put in that request and made it clear that I have some concerns.

So, now school is on. We all have to get used to our new routine. Based on how things have gone over the last 10 calendar days, I doubt that's going to be a serious issue. I have a good feeling about things right now, for the first time in quite a while. It's a nice feeling.
Posted by DRS Are The Best at 8:32 PM