....now it's time to go again. I hate doing this. I always put it off for as long as possible. But it's getting out of hand. We need to do this. It's becoming unruly. We were supposed to go last week, but illness got in the way. Yup......It's time for Simon to get a HAIRCUT.

Simon has NEVER liked to get haircuts, but it wasn't so bad early on. Unlike with his older brother, we started with the buzz, permitting the stylist to use the clippers (for Daniel they were only allowed to use the scissors for the longest time). But the experience has been getting steadily worse. I'm not sure if it's just that he's getting bigger (consequently stronger) or if he's becoming more afraid of the situation, or something completely different. But now he HATES getting his haircut. And when Simon HATES something, we try to avoid it as best as possible, which may not be helping him much.

We used to go to a place in the local shopping mall specializing in cutting kid's hair called Cartoon Cuts. But, we went one day and the person who ALWAYS cut his hair was gone. Then the next time we went, the store was gone. We had to find somewhere else.

There's another kid's haircut place not too far from here. I had taken Daniel there once before, before we moved 5 miles further up the road, called The Yellow Balloon. They were OK, but I really preferred the way this one person at Cartoon Cuts did the kids hair and the extra travel distance was enough to push me towards the mall, so we hadn't gone back for a while. That is, until this summer when Simon needed a haircut and that was the only place I could think of to take him.

I sit in the chair holding Simon tight, keeping my arms around his so he can't squirm away (despite his many attempts at it) and the stylist gets started. She goes as fast as possible -- trying to be done within 5 minutes, tops. Then, when it's all over, Simon gets a handful of Goldfish crackers (or whatever else is handy in the huge backpack I carry with me when I go anywhere with any of my children), I'm wishing for an aspirin (for the headache) and an icepack (for the bruises), and we head home.

But he looks so much better (once he's calmed back down), as you can see in these pre-post shots. 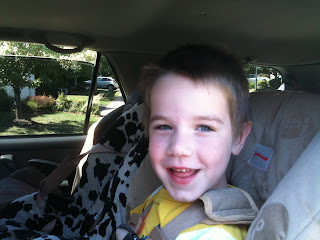 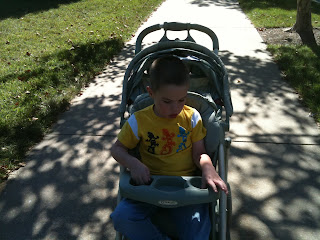 There's got to be an easier way. I know it. I just need to find it. And before Simon gets much bigger and stronger. He's quite violent when he feels trapped.
Posted by DRS Are The Best at 8:13 PM