It's about a small baby girl born on Tuesday afternoon in Connecticut. Her family learned several months ago that she had Trisomy-13. As a member of that family, I shared in the jubilation when the announcement came that she was breathing!!!! And I also felt the crushing blow when I got the phone call from my husband informing me that his niece wouldn't be breathing for long without a miracle.

Health is everything. Without it, we cease to be. No matter what happens, that is always at the core of anything. As difficult as the last year has been for me, I have the comfort in not having to fear for the health of my children. We may worry about the twins' well being or their ability to succeed in school and otherwise, but in the end, we know they are strong and healthy. And, given the improvements we've seen over the last year, we also believe that they will succeed in life.

So, now I've been given this reminder, in a very harsh way. I hope I can always cherish the moments I have with my children while they're still young enough to allow me those moments, and always to embrace the gift that is their good health. My thoughts and prayers go out to anyone who cannot say the same.
Posted by DRS Are The Best at 8:45 PM No comments:

Actually, that's not true -- STOP THE SNOW!!!!!!! In the last week, we have gotten nearly 4 feet of snow, and we live in MARYLAND!!!!!! I grew up in New York; I went to school in New England and spent about 2.75 years living in Pittsburgh, PA. I have NEVER seen as much snow as we've gotten between last Friday and this past Wednesday. Schools were closed all week starting with an early dismissal on the previous Friday and a snow day for a small flurry the previous Wednesday. All of my kids will be going to school into JULY -- and that's before they start with ESY (Extended School Year).

We are going CRAZY here. I know -- it isn't a very long trip. As children on the spectrum, we need to have a routine. This week, that routine has gone out the window. It feels like we've spent almost the entire time inside with the television on (pulled out every movie I could find that was appropriate) reading the same books over and over again and solving the same puzzles over and over again. The saving grace of having the kids home all week was Kevin was also home for much of it as the federal government had shut down (except for essential on-site personnel). Even though he spent a fair amount of time shoveling or working from home, he was HERE to relieve me when the need was there. 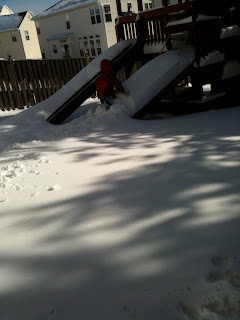 utside. We'll just call it a small disaster. I bought "rain boots" for Daniel last week in preparation for this week (we knew what was coming and for a change the meteorologists got it right) -- I went to Target and they no longer had ANYTHING for winter-wear (but these boots were lined and the right size so I figured it was good enough). Well, the snow was so thick and packed easily that it pulled his boot right off of his foot. Then it did the same thing with the other one. We managed to uncover one of them. The other boot, well, perhaps we'll find it in time for his 5th birthday in April. But it made him really upset and he was really cold and couldn't wait to get inside. 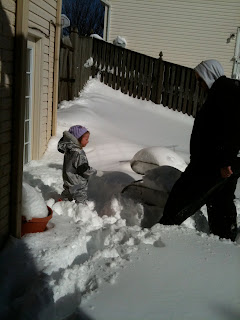 Rachel lost it when I put her in her snow suit -- I managed to get her outside, but she just kind of stood by the door crying and not quite sure what to do. Now, I have to admit, I can't blame her. She's a 39" little girl and there was 29.5 inches of snow that had fallen within the previous 48 hours. 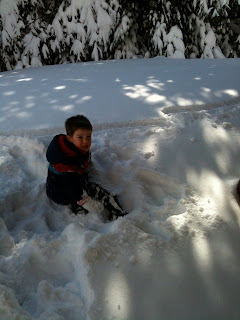 Simon had a good time -- he managed to fall in the snow and was so shocked and bewildered that he forgot to be upset about it all. That's really funny in most respects because he's the one that can't handle change and has more sensory issues when dealing with unfamiliar textures and experiences (the first time he was given PlayDoh, he nearly vomited at the mere touch of it only about 9 months ago).

And, to make it even crazier, we have a long weekend this week for President's Day but on Monday they are predicting more snow -- now this one shouldn't be much, but right now there's NO WHERE TO PUT THE SNOW -- at this moment, I truly believe that, if a single flake falls, the area will just shut down.

So, to paraphrase a nursery rhyme, "Snow Snow Go Away; Don't Come Back Another Day"!!!!!
Posted by DRS Are The Best at 8:21 PM No comments:

....but we finally got the results of the genetic testing on both Rachel and Simon. No surprises. Everything was either "Negative" or "Normal". For each of them, KKI had tested Karyotype, Fragile X and Array CGH. So, now we have those answers. Or maybe we just have more questions.

I'm not sure why I'm reacting this way. It was predicted by most (if not all) that these tests would come back "normal" since Rachel and Simon don't show any signs of other conditions that can simulate the appearance of autism (like Fragile X). But, being twins, I think I was expecting to learn of a genetic link between their DNA and autism.

There are many positives to this -- far more than negatives. But it does bring up the questions of nature and nurture once again. If there is no apparent genetic pre-disposition for either of them to develop autism, what in their environment affected their development enough to put them on the spectrum (that didn't affect Daniel)? Was it the 6-MP during pregnancy? Was it Remicade for the dose and a half I received while I was nursing? Does it have something to do with Crohns that isn't covered by those other 2 questions? Was it something to do with the fact that they were 6 weeks premature? Was it something that I did? Or did it simply just happen and there's nothing that could have been done to avoid it? And, going back to the nature side, is there actually a genetic pre-disposition that they both share that the specialists just don't know to test for (but that's kind of the point of ascertaining the Karyotype and Array CGH)?

I'm not blaming myself or anyone else in my family, so when reading this, please don't think that. But, as an epidemiologist, I want to understand this. That's very hard to do when I don't think anyone does. But, the most important thing here is that now I don't have to worry about some of the other symptoms of conditions like Fragile X.

Hopefully, we will continue to see them develop and grow and maybe someday, everyone will be surprised to learn that they are autistic. That is always the goal.
Posted by DRS Are The Best at 8:02 PM 1 comment: