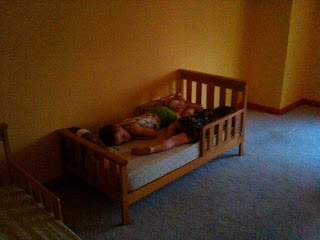 We've had problems with Simon's sleep habits on and off since he turned 1 year old. The first year, he was the easier sleep twin and would sleep through Rachel waking during the night. He'd often sleep all the way through -- at worst he'd wake up once around 3am (with Rachel) for a quick snack. Then everything changed.

Suddenly, Simon didn't want to sleep. It would take him forever to fall asleep. Then he'd wake up several times and I'd be in his room for what seemed like hours every night. He'd take long naps that I would have to end so that we'd have a prayer of him falling asleep at night again. Then, at the urging of others, we forced the issue and taught him to put himself to sleep when he was about 27-28 months old. It would take him (what seemed like) forever (an average of an hour a night), but he'd do it. We also started making him go back to sleep by himself if he woke during the night, which happened nearly every night for about 5 months (starting last August). Then he turned 3, lost the nap, started his new school program, and things finally seemed to get better.

I had been warned that this may happen, from the time we started receiving services. Some autistic kids are fully awake in the middle of the night and are loud, rowdy, and seem ready for the day. These cycles can last a while. We had one of those for those 5 months in the latter half of 2009 -- he would wake up between 4 and 4:30 and if we were lucky, he'd fall back to sleep around 5:30. I had also been warned that this is the type of behavior can resurface periodically. I know someone who has this with her own son and, when these cycles happen, she stays awake listening to him every night. The only 2 positive aspects of these behaviors in Simon is (1) he doesn't intentionally disturb anyone else -- I'm usually woken up by him, Kevin will sometimes wake to his antics, but the other 2 kids will almost always sleep through it and (2) he does this relatively late (currently in the 5am hour, historically starting in the 4am hour). Because of that, I've been able to justify keeping the twins together in the same room for the time being. Simon will occupy himself in his own room, playing with the few toys that are left in there, walking around, opening/closing the closet door, knocking down the glider chair that his Dad sits in to read their bedtime stories, etc. We periodically discover something that he has learned a new destructive way to manipulate, and we do our best to fix it (i.e. bungee-cord shut the dresser drawers so he can't climb in). He's actually destroyed the screw holes in the door frame for the hinges on the door to his bedroom already so that we cannot hang the door, so we've been using a gate in its place. 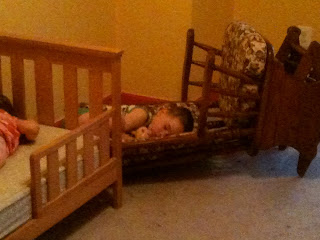 Now he's discovered how to remove the gate, which means he no longer stays contained in his room. He will pull down the pressure mounted gate, climb over it and come running into my side of the bed, so proud of himself for figuring out how to get around that last obstacle. If I bring him back to his bed and leave him in his room, he'll just come after me, pulling down the gate once again if I put it back up. I can't stay with him in his room or I'll be taking that step back. So, for the last 2 mornings, I've been letting him climb into the bed with me. This morning, when I got up to get ready for my day, giving up on the possibility that Simon might fall back to sleep, he followed me, realized I was boring, and went into his brother's room to play with the toys, thus waking him up. This is what I'm most afraid of. If I can't keep him contained in his own room, what's to stop him from waking the rest of the family, or getting into trouble in a room that isn't set up for Simon's mid-night antics?

Additionally, this morning was earlier than yesterday (5:30am yesterday, just before 5am today). This is probably my first clue that we're working our way closer to the 4:00am wake-up time from last year, and our new cycle of this behavior has begun.

I need to stop this. I need to stop this now. I can't do this for the next 5 months. I especially can't deal with this right now when Kevin will be gone for 5 nights for a business trip next week. I have to figure out how to get Simon to go back to sleep quickly, in his room, and stay in his room. NOW!!!!!