Moms aren't allowed to be sick. We know this. When we take on the job, we accept that as a truth. And when that cardinal law is broken, things often fall apart.

In many ways, we're lucky in our house. I don't do much of the cooking (I fill in as needed, but in general if we're not having chili, I almost never make dinner). And my cleaning abilities are, well, abysmal. But I'm still not allowed to be sick. And I've taken that responsibility very seriously.

I think that, since taking on the "Mom" role, I have only been really sick once. That was when Daniel was about 6 months old and then I was REALLY sick (requiring 2 hospital stays and surgery). It led to me having to wean him much earlier than I would have liked and then taking that medication that I've alluded to a couple of times (which is still a daily thing). I've had my share of colds, but usually am fully recovered within a matter of days. I don't think I've had as much as a fever since that time. That's probably why this year has been such a problem for me.

Since the year began, I've been feeling lousy. It started with a cold/cough (the cough is still there and extremely annoying and persistent). I have no energy. I just want to sit or lie down and go to sleep. There isn't time for that. But I'm not REALLY "sick". I haven't got a fever. I'm not spending my time hunched over the toilet watching my last meal come back out of my mouth. I just feel "BLAH".

I can't believe I'm saying this, but I'm almost at the point of saying, "If I'm going to be sick, let's just do it, get it over with, and then I can get back to myself -- BRING IT ON!". This feeling that "being sick is coming" has gotten tiresome.

If I had the energy, perhaps I could have prevented this: 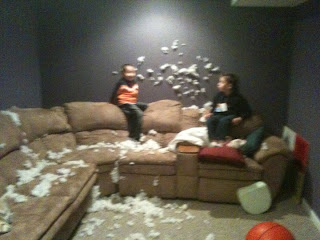 That pile of fluff had been growing behind that couch for days since I just didn't have the energy to do much more than say, "NO FLUFF!" to Rachel and Simon. Then, when Daniel and his friend was playing downstairs, they decided to pull the stack from behind the couch and decorate that side of the room. They made a "Christmas Tree" on the wall (they're on either side of it). I suppose that's what I get -- I left 2 4-year olds and 2 5-year olds alone in the room for 30 seconds to go to the bathroom. I should have known trouble would ensue. I suppose I should be happy that all of the fluff was contained around the couch. And, just to clarify, all of that fluff comes from a single cushion in the corner of the sectional and it's only been about 1/3 emptied.

I need to find my energy. I need to get over this cold/cough/whatever it is. This "blahness" is bringing me down.
Posted by DRS Are The Best at 3:36 PM