I was originally writing this to publish last night, but we had such an amazing story about Rachel, I held this off for a day.....so we have another case of posts on consecutive nights.....
We all want to see our children excel and improve. For the longest time, we've been seeing so much of that in Rachel, but not so much in Simon. Then we've had the last few days. Seriously, Simon.....you had to pick NOW to start showing me how much you've been learning????? Less than a week before your IEP Meeting, when I was all set to ask about changing your placement? Are you TRYING to give me, your dear sweet mother (no laughing please), a nervous breakdown?????
It started this weekend -- he was stacking blocks. And not just building a simple tower with the same block shapes. He was actually CONSTRUCTING a tower. He would build it, it would fall down; he'd make some changes and build it up again, it may fall down; he'd do it again and, if necessary, he'd PUSH it down. It was "normal" play. He really didn't want anyone to play with him, but for right now, we'll take it!!!!!! 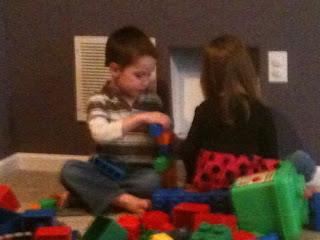 Also, he's starting to request things and activities. If he is getting tired and wants to get ready for bed, he'll say "Pajamas" and bring either me or Kevin (usually Kevin) his PJs to help get him dressed. Sometimes he wouldn't say the word, just simply bring them over. He's singing and dancing to Pajanimals and Wiggles songs as we go through our normal routine. And he's getting more receptive to the idea of "play"when Rachel comes over to him and says, "Come on, Simon!".
But this meeting is coming up in just a few days, and I have to decide what I'm going to do. I was going to tell them that I have serious doubts about his placement. Now I'm not sure that's the smartest thing for me to do. I do feel I need to bring up his placement and make it clear that I still have questions about which program MCPS can provide for him that will best suit his needs. But I'll do it more quietly than I was planning. I'm no longer convinced that we need to seriously consider making the change, but I'm also not convinced that he's where he should be. I want to hear what they have to say and hopefully they will be able to give me specific reasons WHY MPAC is the best program for him, or why the other programs will not address his needs. I took some time to review his draft IEP as well as his last report card this morning and they say he's "Acheived" his goals, but then there are identical ones on the new IEP.
There are still just too many inconsistencies. And I feel like I can never get a straight answer out of them (not that I've ever really had the nerve to ask or follow-up appropriately). This question shouldn't take everyone by surprise. I kind of implied I was thinking this back in May when I had a conference with several members of his team (one of which will likely be in the meeting). It's just been a while since they've heard me question it in person.
In other words, I'm not going to let myself be hot-headed. The question remains, "Can I succeed?".....
Posted by DRS Are The Best at 8:21 PM