......it's nearly 9pm on November 3rd, and my attitude is still vastly improved over the last several months. The bad news is I'm EXHAUSTED!!!!!! Daylight savings time ending, in theory, gives you an hour of extra sleep. However, since entering parenthood, I have NEVER experienced that phenomenon. I have "lost" the hour sleep when daylight savings time begins, however. Why is that?

The frustrating thing right now (but still cute) is Simon's new habit of climbing into Rachel's bed every night. She's fallen asleep like that 3 times, Simon twice. They are just so adorable seeing them like that, but Simon really is bothering her at times when he's in her bed. I do think that she's inviting him i 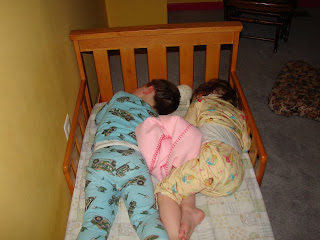 n though. When he first noticed it, Kevin called for me to bring up the camera -- apparently, they were "spooning". By the time I got the camera up there, they had both changed positions and I never got to see the image that Kevin described. But they were still adorable to behold and it was another chance to see that picture that I had from the moment I learned we were having twins -- the two of them lying in bed together. I expected this when they were newborns -- wasn't planning on it when they were nearly 3 years old -- but I'll take it!!!!!

But things have been really going much better lately. I don't know if it's because of that "day off" we took last week or something else led to this change, but I'm feeling much better about everything right about now. Maybe I've just gotten used to the look of the calendar (with the kids schedules filled in almost completely). Either way, I'm just grateful that life is better these days.
Posted by DRS Are The Best at 8:51 PM