The day finally arrived -- the day we were going to the Laurie Berkner Concert. We had been preparing for this since mid-March. I'd been showing YouTube videos to the kids of the band performing on stage as well as the video provided directly by Two Tomatoes Records, LLC. We knew the set list. We practiced the songs. We (continued) watching Jack's Big Music Show on NickJr, and I pointed out every time we saw the Laurie Berkner Band, letting Simon and Rachel know that we were going to see them perform soon. And, when I ordered the tickets, I made sure we had an aisle seat so we could get up and walk around if it was necessary (and we knew it would be at some point during the show). All that led to today.

Was all that preparation worth ANYTHING?

Let me start by saying th 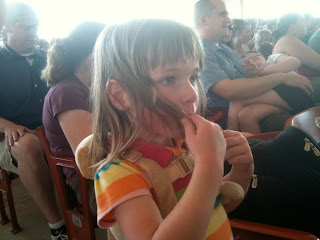 e one thing that we really didn't prepare anyone for was the heat. It was over 90 degrees at the outdoor venue of Pier 6 Pavilion in Baltimore and quite humid as well. Despite everyone arriving at the concert dressed for the warm weather, it was HOT (which doesn't help matters)!!!!!!

Daniel arrived at the show so excited and full of anticipation. His interest in the Laurie Berkner Band is starting to wane just a bit, but still, seeing them performing live makes him remember how much he really DOES love her music. And he made a friend of the little boy sitting next to him, and overall, had a wonderful time.

Rachel was also looking forward to it all. She was excited to get to her seat (but wasn't anxious to settle there). But she was ready for it all. And she remembered the video sent by the band and knew the order of the first 3 songs and was eagerly anticipating them all. And, throughout the concert, she really did behave as well as could be expected -- she had her "bored" moments, but overall was captivated by what she saw and heard and was genuinely happy to be there.

Simon seemed to recognize that he was in a place where he would see a show. He really has a remarkable memory and for some things (but only ones that I don't want him too) is really really good at generalizing things (like recognizing that, despite never being at this particular place, it was clearly a place to watch a show). He was fine until the band was about to come on stage. Now, normally, he reacts to the dimming of the lights, but that wasn't the case for this performance, since it was an outdoor concert. But the noise of the microphones were clearly louder than what he want 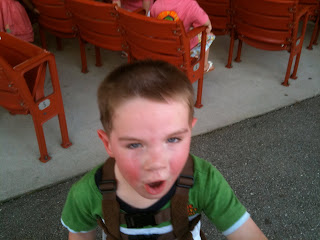 ed to hear (despite TRYING to prepare him for it all) and he immediately began to get upset. The first song the band sung was "Victor Vito", which is definitely one of his most favorite songs. I was hoping that if I could get him into the performance with that song, we'd be golden. But his hands were covering his ears and he refused to stop screaming, even for Victor Vito. After a couple of songs, I took advantage of being on the aisle and moved INTO the aisle and started trying to get him to dance to the music. No go. So, eventually, I brought him over to the side, hoping maybe away from the crowd he'd do a bit better. Again, No Go.

That's when Kevin came to the rescue. He had Rachel on her leash (Simon was on his) and we switched. I went back to 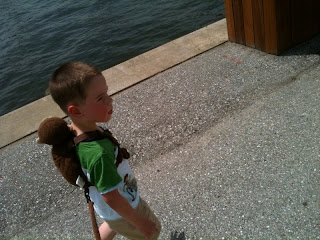 our seats and left Simon with his Dad. They walked all around the pavilion, and as they got closer to the water, Simon settled down and took his hands off of his ears. He was finally able to begin enjoying the concert. He spent most of the concert walking around and was only in his seat for rare brief periods, but he was able to hear the songs and even dance to some of his favorites that were performed in the latter part of the performance.

Then, after it was over, we got to go backstage to meet the band. Rachel was so hot and tired by this time, she really couldn't enjoy the experience and just lay down on the floor (slept for the whole hour+ ride home once we got back to the car). And Simon refused to even look at the band members. But they did make the attempt to engage him, which I so appreciated. Daniel was thrilled to be there, and all 3 kids left with an autographed postcard by 3 of the 4 band members, including Laurie herself. And I had the opportunity to thank her for how much joy my kids experience through her music and also thank her for all the help her organization provided me to try to prepare Simon for the show. 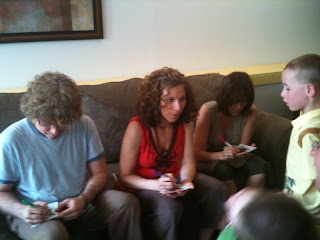 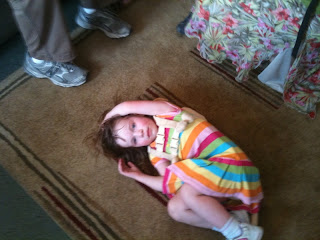 So, to answer the original question, was all the preparation worth it, I guess the answer is yes. 6 weeks ago, I had to leave a show approximately halfway through because Simon was just that miserable. This time, even if I was there alone and didn't have Kevin's support, I think we could have made it. But it wasn't as good as I hoped for. Not even close. But I know that Simon made it through a show. And he can do it again. Just not for a long LONG time.
Posted by DRS Are The Best at 9:36 PM